While cleaning up my work area today I moved a bunch of electronics stuff around into different storage boxes. Since I had most of the turnkey embedded hobby systems out as part of that reorganization, I decided to take a photo of them. 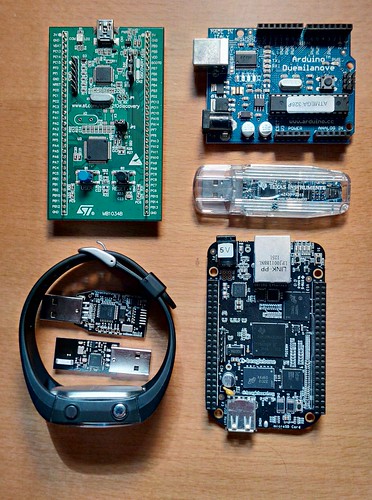 I was originally going to turn the BeagleBone into a low-power edge box running Arch Linux, but that project was easier with some donated hardware and DD-WRT. I think the plan is to turn it into a BitScope device once that is officially supported.

The Chronos watch I’ve tweaked heavily, but the irony is I never wear a watch, so it sits in a box. It does occur to me now that the watch guts could easily be turned into a remote weather datalogger. So let’s put a pin in that idea.

The Arduino is currently a KIM UNO KIM-1 (incomplete) software-only emulator as discussed earlier. I’d like to get back to getting the KIM-1 RRIOT emulation more complete.

The other two I’ve run the equivalent of “Hello World” on (i.e., made an LED flash). I’ve had idle thoughts about turning one or the other into a little bike computer of some sort.

So, not exactly bursting with embedded activity over here, but a respectible collection that I’ve actually spent some time with. I might even have working toolchains for the majority of these devices.