So, I’m home sick from work today and, as one does, I’m idly playing around with some emulation stuff. Earlier I was researching my KIM-1 emulation project (which is turning out to be a bit harder than I thought).

Then, for some reason, I decided to get IBM PC-DOS 7.x/2000 working on VirtualBox. This is not for any particular reason, though I’ve occasionally needed a real DOS environment to mess about with abandonware. So, this image may be put to good use one day.

But for now, an almost-complete PC-DOS system. I haven’t figured out the networking stuff yet, but it has CD-ROM support, loads DOSidle so it doesn’t burn up my Mac, the usual assortment of high/upper/confusing/WTF memory settings that DOS requires, and so on. I don’t think networking will be that hard, but my Google-Fu is not finding the PCNet ethernet drivers that VirtualBox is emulating. So, for now I’m using sneaker-net. 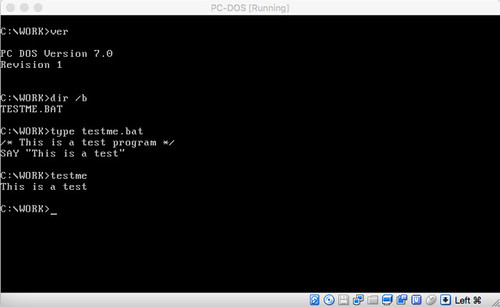 Yeah. So, that’s a Rexx script being called via the command interpreter via a pseudo hash-bang mechanism (think of /* ... */ as the shebang line). There’s a reason I liked to run PC-DOS instead of that other one.

What’s going to bend your noodle is that I actually paid for a copy of PC-DOS, lo, those many years ago. So, I’m technically not pirating anything, matey.

Well, that was easy. Started the PCNet packet driver and ran DHCP from the mTCP project. I was even able to annoy some people on IRC.